Ethan Sloan’s bedroom is crawling with critters. Shelves are stacked with aquariums and glass jars filled with twigs, plants and insects. A bookcase is lined with titles reading “The Big Bug Book,” “Keeping the Praying Mantis” and “Bug Faces.”

Ethan, a 13-year-old eighth-grader at Spencer Butte Middle School in Eugene, is a bug expert. He would prefer, however, to be called an entomologist. He can’t remember a time when bugs didn’t fascinate him, nor can he imagine his future without them. Ethan’s dream is to attend New York’s Cornell University, as it has one of the top entomology departments in the country. He even has three Cornell sweatshirts, which he rotates wearing to school each day.

“This is a Chinese mantid,” Ethan says, pulling out a long-limbed, beige insect. He brings it up to eye level and lets it run across one hand, catching it in the other. He places it back in its glass aquarium and moves to the next one. 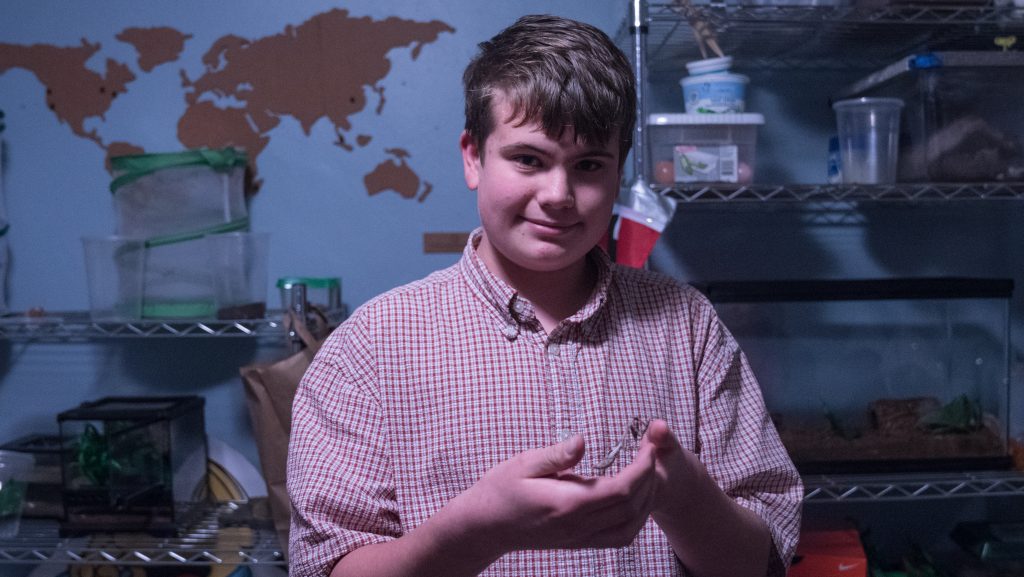 “And this is a vinegaroon,” he says with affection, stroking the pearly black body. “It gets its name from its unusual defense mechanism. When threatened, it will spray an acetic acid that smells like vinegar at the predator.”

“Show us the mealworms,” says his mother, Tara.

Ethan drags out a set of plastic drawers filled with sawdust. He shuffles his hand through the shavings, removes a small yellow worm, and pops it in his mouth.

“Tastes like an avocado,” he says as his mom grimaces and shakes her head.

Ethan isn’t harvesting mealworms for taste. His studies have led him to think ahead – not just about his own future but the entire planet’s sustainability. He started the Bug Club at his middle school, where he organizes lessons in entomology: studying arthropods, understanding the importance of insects, and practicing entomophagy – that is, learning to cook with the likes of crickets and mealworms. They bake cookies with cricket flour and make mealworm tacos.

“Bugs use a lot less resources than cattle and more common livestock,” Ethan says. “Insects are a good way to get protein and nutrients, without using as many resources. So they’re the food of the future.”