Confidence Soars with the Music

Mattityahu Tenney smiles reluctantly at first – as if fighting to keep the corners of his lips from curling. He doesn’t let it break until he gets to the music room.

“I don’t think Mr. (Chris) Dobson will mind if I borrow his guitar,” he says, pulling the music teacher’s instrument down from the wall. “It’s the nicest one here.”

The guitar changes Mattey. A confidence erupts from his lungs that wasn’t there moments before – a sureness in the notes, but also in himself. By the time he finishes John Denver’s “Country Roads,” he’s beaming.

Mattey’s music is more than a hobby. It’s more than his path to becoming a choir teacher one day. Music is Mattey’s lifeline. It’s how he feels safe. At home. Himself. 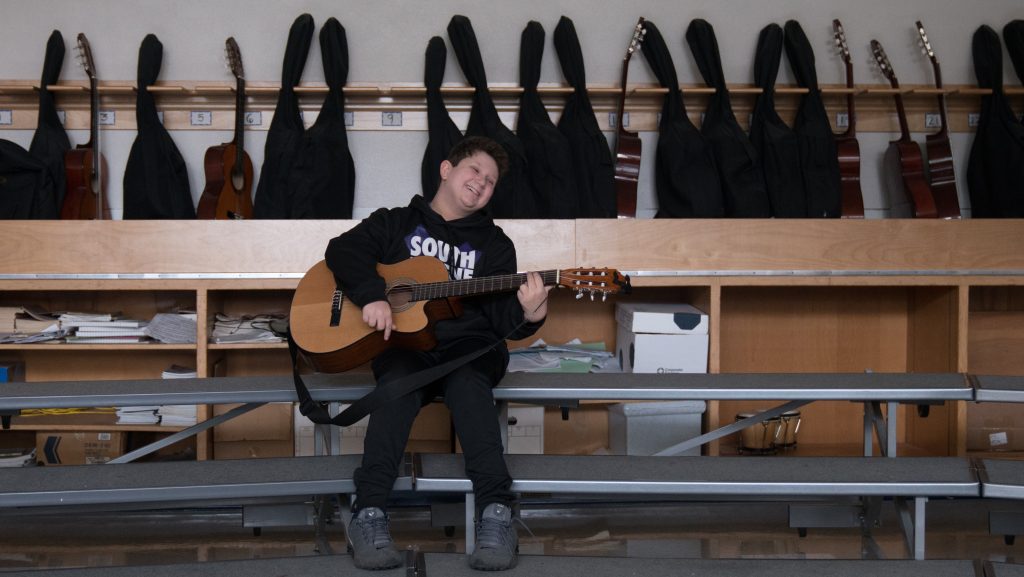 Last year was difficult for Mattey, causing him anxiety and depression. He faked illnesses to stay home from school. He stopped playing music.

Amid this darkness, Mattey rediscovered his lost passion. One afternoon, as he surfed online, he was inspired by a musician. “I thought, ‘I wish I could do that,’ and then I remembered, I’m a musician too.”

Mattey, an eighth-grader, is in the choir and theater programs at Spencer Butte Middle School in Eugene. He calls the choir room his “in-school home.” To ease emotions he once bottled up, he writes his own music with lyrics that describe his experience with depression. It has empowered him to engage in his school beyond the music room, planning harassment-free zones and researching ways to prevent self-harm in teenagers.

Without arts education, Mattey could not become the person he dreams of being. He plans to go to college to study the history of musical theater and eventually teach kids how to make music. He’s already researching scholarships, and he knows he has to maintain a high GPA to win them.